The campaign map is setup with the playtest forces.

Now the French are to move.

At last we shall see if all the preparation tools will work.

Email ThisBlogThis!Share to TwitterShare to FacebookShare to Pinterest
Labels: Playtest

The commands are set up for the playtest in December.

The map is limited as are the simple objectives for the teams.

For the French, penetrate the line of the Spree River in three places *and hold open those crossings uncontested for three days* or get a Division to survive combat in Berlin.

For the Allies, drive the French back from Brandenberg and penetrate the upper Elbe River between Wittenberg and Luckau.

We will see what battles come about with this setup.

Email ThisBlogThis!Share to TwitterShare to FacebookShare to Pinterest
Labels: Playtest

The data files are finally out, thanks to Drop Box, and players are starting to examine the tool kit and asking questions.

One item that has come up regards the map symbols.

I have mostly used standard military symbols, where I have deviated is with the special officers or commands for the game, characters such as Blucher, Schwartzenberg, Ney and, of course, Bonaparte.

Note that the 'blue' areas are all 'clear' when placed on the map surface.  I have also expanded the images for better display on the blog here.

For the troops, as all units have two sides (flipped over or 'covered' and 'exposed'), I am using an 'eagle' symbol for the 'covered' side of the troops.  This is inspired from the French golden Eagles that topped the flag poles carried by each battalion.

The 'open' side of such forces are the standard military symbols:

The game box also contains a data file for each of these commands, listed as the Corps level of command (save for some special units like the Cossacks attached to Russian HQ)

To view these simply hover your cursor over the unit, in the box or tool bar (side bar) you will see a little 'x' to the left of any unit with 'extra data' in the dialogue box.

Note that you can read this data whether you have the unit selected or not when the unit is on the map also.

Data boxes can also be seen on the side bar or even before the unit is deployed.

Selecting units is as simple as drawing a box around the ones you want to select, once they are selected the units will appear in the sidebar tab:

An event that will be done a lot over the course of this game will be to 'flip over' units to the 'covered side (where the data box will not come up on the map).

To do this simply select units and 'flip' them with the counter control:

There are more "how to" suggestions to be found on the Brainiac site:

Setting up a game tutorial

Another interesting tutorial that includes discussion about 'fog of war' issues.

This week will be one of allowing the players to download the software and do some self-exploration.

Posted by MurdocK at 5:00 PM No comments:

You will now find tabs across the top of the blog that will lead you to all of the Orders of Battle as found at the start of the Campaign.  The original work credit goes to George F. Nafzinger as these are from his immense collection.

The Troop Strength numbers that you see are the values that have been assigned to each Division (or brigade for some units) that will have a discreet strategic unit in the campaign map.

Email ThisBlogThis!Share to TwitterShare to FacebookShare to Pinterest
Labels: LEIPZIG I, Orders of Battle 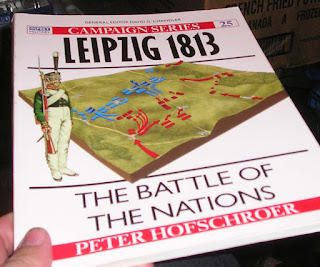 Welcome aboard to all posting and contributing writers, game players or commentators.

This weblog is designed to be an operating and connecting place for sharing and updating action relating to the campaign series of games that we are taking part in.

For the start this is expected to be the 1813 Leipzig Campaign.
Posted by MurdocK at 1:37 PM No comments: