The game was pretty much a draw which ended when the French side failed its 50% morale roll and so surrendered the field. The Russians were in no better shape at that point but passed theirs. I used the Div. morale rules for the small forces and set up following James' recommendations.

The french guns destroyed 4 Cs units with canister. They were less effective at range (the horse guns were out of their canister range). The Russians used a pincer movement. One pincer maneuvered through a small wood to hide from guns but this offered only temporary comfort as they were attacked right away by a hussar unit upon clearing the forest, losing a CS unit. This did siphon off the attention of half the french cav and allowed an overloaded attack on the Russian left to close, using the leading unfortunate CS units to shelter the rest by drawing the canister fire. The survivors closed and 2 and 3 on one melees ensued. A CàC unit broke a cossack easily and was recalled rather than doing a breakthrough. The Russian DR unit broke the two Westphalian CàC units, the second on a breakthrough.

The horse guns got out of trouble but the Heavy gun had to stick it out. They broke two CS units with canister and damaged another (one horse gun was now screened). A new round of melees with the remaining "live" CS units (not broken or blown) resulted in the destruction of the remaining Westphalian CàC unit through a 3 on 1 attack. The morale rolls ensued. The MR3 Sappers formed square and were accordingly left alone by the filthy cossacks.

The Russians were saved because the french arty did not succeed in killing one unit per turn early on and having closed quickly, they were able to simply throw more dice in massed attacks. The Dragoon unit was able to go in untouched and made the difference by having the advantage in two separate combats, they broke the two Westphal. Chasseur units. The 3rd Westphal hussar unit was beaten by a massed attack and a another massed attack by the Cossacks was lost, but they survived as dice difference was 2 and the damage by shared amongst 2 participants.

Full AFTER ACTION REPORT link will be attached once the AAR is posted.
Posted by MurdocK at 9:28 PM 2 comments: 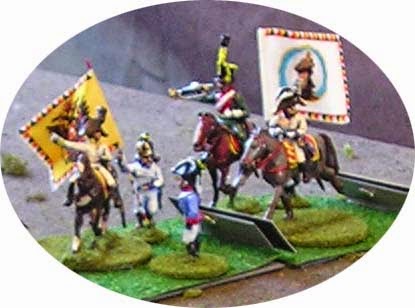 Players will be having updated maps in the next day to continue the campaign action here with 3 Sept 1813 (fictional) in the Campaign of Nations.
Posted by MurdocK at 10:47 PM No comments: