In our simulated Campaign of Nations a Russian force was ordered to cross the Bobr River region near Rothenburg.

The Battle of Rothenburg was played out using SHAKO rules by the Avon Napoleonic Fellowship.

Click the links above to go to the game and blog.

In the end the crossing was not hotly contested ... 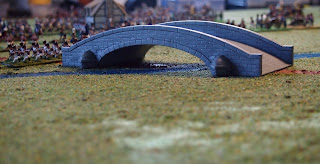 The provision of information is always critical in the development of a Campaign.

During the period of the 1813 Campaign the eyes of the Allied armies were the Cossacks, for the French it was the Hussar or Chasseur that probed, while the Lancer performed screening duties.

There is a critical set of information, both sides want to get at this information and preserve the secret of their own from the other side.

To 'game-out' this situation, the game master is proposing a 7 game skirmish series, where the winner of four of the games will get to have the enemy information and preserve their own secret.

The location of the battle series is not revealed until after the series is played out ...